Writing a novel is a huge undertaking. Millions of people try it, but only a few manage to finish it. Sometimes, when we are in the middle of the novel writing process, we get tired of the characters and the universe we’ve created. We shelf the project, and many never return to it. 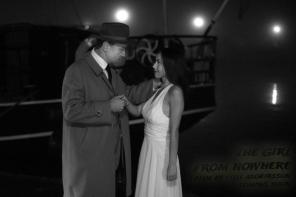 Short stories can be a good distraction. You get your time off, but you keep writing. And that is important. Don’t stop writing. Coughing up a short story is like taking a weekend off and changing our surroundings. It clears the head while keeping us active and when we return to the novel, we are rested and ready to dive back in.

My background is films. It has been a hobby and borderline profession for a few years. Under the Black Sand was originally written as a screenplay. It only became a novel when I failed to raise a million to make the film. One day, I keep telling myself.

So for me, making the occasional short film or music video is a way to lay my creative egg, get distracted in a good way and to relieve the pressure that builds in people that have this need to create.

Late 2011 was a slow time for Under the Black Sand. I had yet to discover Scrivener and it was nothing more than a million words in a massive document. I had lost sight of the goal, the light at the end of the tunnel wasn’t in sight. It wasn’t forgotten though.

The opening scene in the film was intended to be in black and white, Film Noir style. So, when heavy fog lay over Amsterdam for a few days, I coughed up a short script and shot a Film Noir. It’s not perfect. Nothing ever is, but I was happy with it. See the link below.
The Girl from Nowhere